Extended breastfeeding is widely accepted in some countries, but the United States isn't one of them. Here, it's an uncomfortable topic thought of as socially unacceptable, and support is lacking. Some really hurtful and untrue comments are often thrown around, and it's time to remove them from the conversation about what extended breastfeeding is really like and why parents do it. If you aren't comfortable with extended breastfeeding, keep the negativity to yourself and avoid texting (or saying) these 20 comments to an extended nursing mom you know, or even anyone trying to breastfeed their kid past 6 months (yep, even before 1 year there are comments). 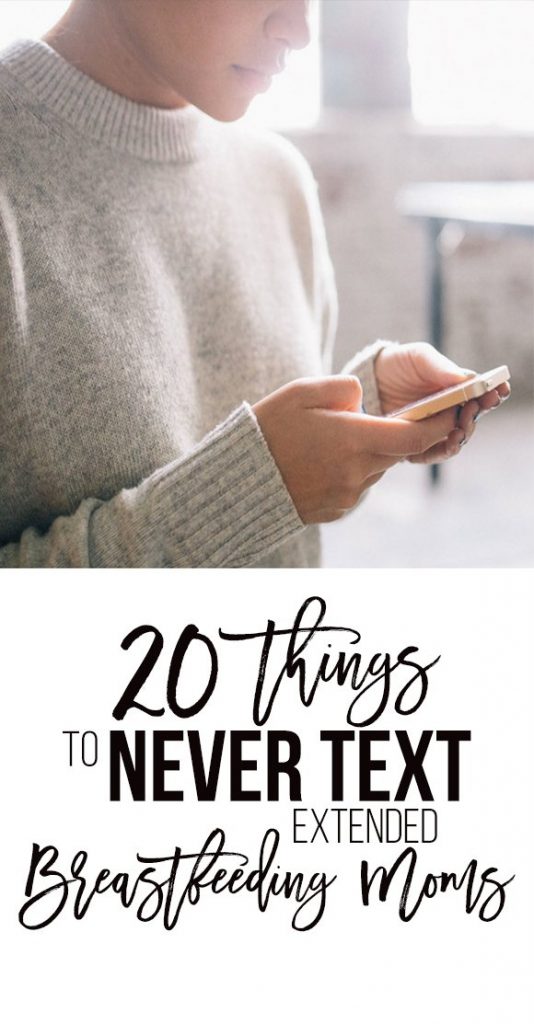 3. Have you seen the movie Grown Ups? Don't be like that.

4. She's too old to be nursing in public.

6. When she can walk up to the breasts and get them whenever she wants it's time to stop.

7. What about the teeth? Isn't that a sign to stop?

8. Do you get some sort of pleasure out of it?

10. I was going to ask you to hang out, but you always have your kid around.

12. You're raising a spoiled child.

13. Nursing has no nutritional value after 6 months.

15. Will you still be nursing when he's in high school?

16. You're still nursing and you co-sleep?! Is your man OK with that?

17. She's never going to learn how to self-soothe.

18. You're setting him up for bullying in school.

20. Our parenting styles are just too different, I don't think we can hang out.

Bay Area mommy and content creator, Shari Stamps has been writing, teaching and taking pictures for 15 years. She started Savvy Every Day in 2013 and officially launched the website in May 2014 to create a parenting website for parents who care about the environment, what they eat and who they support through purchases and donations. In 2018, Shari changed the Savvy Every Day name to Navigating Parenthood and began work as a postpartum doula and peer postpartum support person through NavigatingPostpartum.com.

Any cookies that may not be particularly necessary for the website to function and is used specifically to collect user personal data via analytics, ads, other embedded contents are termed as non-necessary cookies. It is mandatory to procure user consent prior to running these cookies on your website.