I have a 3.5-year-old daughter, and without trying to feed into a stereotype based on her age and gender I'm going to tell you that she adores all things Disney on Ice. I took her to her very first show when she was 2, and now it has become one of those shows I'm obligated to take her to see for reviews because she just has to be at every one of them (OK, I'm very impressed by each new show, too). That being said, we just saw the latest show (at least on the West Coast) — Worlds of Fantasy — so I'm now a veteran to 4 Disney on Ice performances and have some survival tips to share. Want a successful, less dramatic night at Disney on Ice? Open your note-taking app, then keep reading. 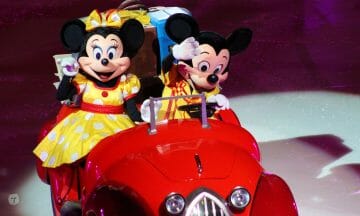 This post may contain affiliate links but is not sponsored or affiliated with Disney on Ice. Please check with your specific venue for questions that may vary based on location.

You read that correctly. If you know that your child is going to complain later on about how itchy her princess dress is when she's wearing it in a seated position for a long length of time, you'll want to plan ahead. Offer other Disney outfits that may work instead of a princess dress or bring a spare outfit in your bag. Also, wear layers. The event isn't that cold, but how cool or hot really depends on each person's internal temp (bring a jacket just in case).

Similar to Disneyland, you may need to bring some Disney character items purchased on clearance at the Disney Store so they're in your bag in case of pre-meltdown emergency. I am not saying to give your child a gift so that they don't flip, but about 85 percent or so of the kids leaving Disney on Ice see everything related to it and want it all so that they can take the experience home with them. Cue the tantrum because they're up too late and overstimulated. This is where the surprise gift comes in and you make it to the car without having to de-glue the kiddo from the stranger selling Cars pennants or Tinker Bell flower hats. These little backup souvenirs work great as positive rewards.

No, I don't mean drink an alcoholic beverage. You have kids now, so pre-gaming is all about the food — eat lunch or dinner before you go so everyone is full and happy. Also, be sure to pack a kids water and some snacks in your purse for the pre-intermission thirst that comes on right when it would be impossible to get out of the seat (and to save some money).

It's fun to at least get something at Disney on Ice, but what it is will be up to you — nachos or cotton candy with a Cars hat? No matter which one you choose, it may just be close to $12, but think about which is a better value to you and your family (probably the one with the hat).

5. Skip the End or Sit and Sit

Leave just before the goodbye song at the end of the show to get ahead of the giant mob of families who begin filing to the stairs once the show ends. If you don't want to leave so soon, enjoy the sit and hang out in the parking lot while the big line of cars leave (usually because some cars aren't following the rule of let one in ahead).

What's the worst thing you could say immediately after Disney on Ice has ended? Well, there are a lot of them, but one is "OK, Em, let's go home and get ready for bed now." Everyone knows she's going to sleep when she gets home (though she'll probably fall asleep in the car first), but you don't throw in her face that she's leaving the world of fantasy and fun for brushing teeth and going to bed. No, no, no. Instead, this is when you just say you need to go find your car and possibly bring out the surprise so you can divert from the fact that you're walking away from the show and it's cold and dark outside.

Do you have some tips to add? Please share them in the comments below!

Bay Area mommy and content creator, Shari Stamps has been writing, teaching and taking pictures for 15 years. She started Savvy Every Day in 2013 and officially launched the website in May 2014 to create a parenting website for parents who care about the environment, what they eat and who they support through purchases and donations. In 2018, Shari changed the Savvy Every Day name to Navigating Parenthood and began work as a postpartum doula and peer postpartum support person through NavigatingPostpartum.com.

Any cookies that may not be particularly necessary for the website to function and is used specifically to collect user personal data via analytics, ads, other embedded contents are termed as non-necessary cookies. It is mandatory to procure user consent prior to running these cookies on your website.