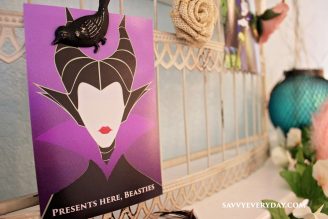 For my daughter’s 4th birthday I thought we’d skip the big party and have her just visit with a few school friends. But after planning Mom’s Night Out in January then helping a new mom and baby event with a few last-minute vendors in February, I forgot to plan for even that! On S’ birthday she asked me how planning for her party was going and I realized that I hadn’t planned anything at all. That day I sent out Evites for a party a few weeks out, and went about the day thinking a little get together at the park would be simple. Then S told me how excited she is for her evil queen birthday. Oh boy . . . I forgot she wanted a Maleficent party. So about a week before the big day I went into hyper-plan mode. I barely wrote and just fixated on possible last-minute ways to make this party unforgettable. Did it come out perfect? Nope! (See the crooked sign on the wall?) There were minor catastrophic moments like unpredictable weather leading to a change in venue from the park to my house the night before the party (which meant I had to put up birch tree decals, take everything out of my car, clean house, and set up in the living room the night before), but it was perfectly imperfect. 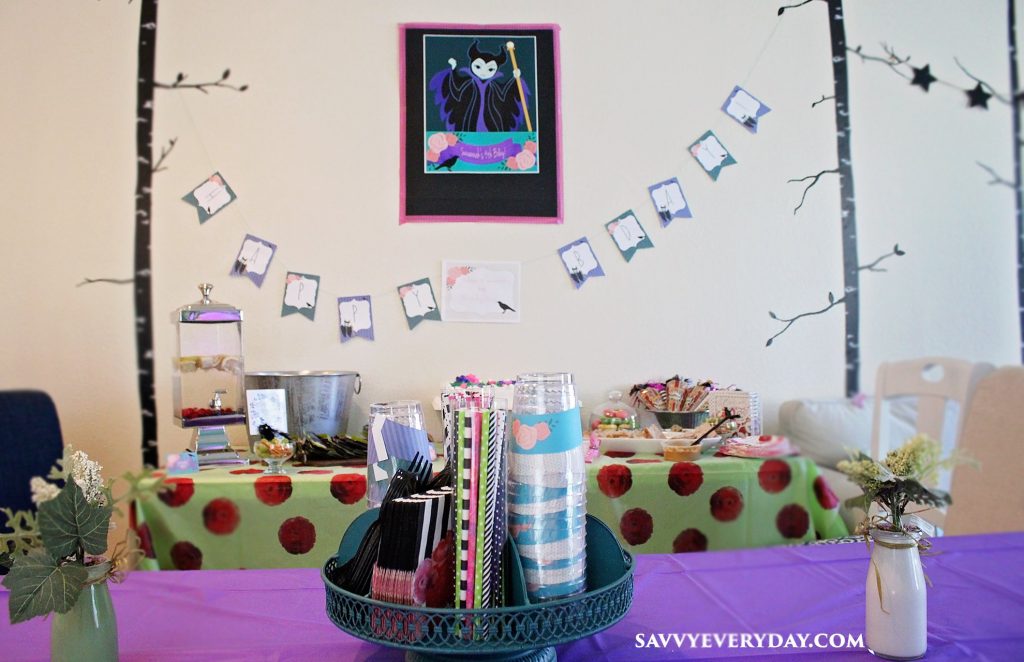 Though this is not a sponsored post and I paid for everything mentioned, it does contain affiliate links. Thank you for supporting Savvy Every Day!

After sending out Evites I found an editable party materials package that fits a younger Maleficent theme from Paper Willow Designs on Etsy ($18.50). After I bought the Evil Queen Birthday Set (with the bunny swapped out for a raven), I was given a 20 percent off code to share with all of you — Use SAVVY20 at checkout when buying anything from her store! Before I found this set I had a young Maleficent theme in mind with light fairy world like touches mixed with older Maleficent gloom so I was buying all the purple, pink and black table cloths, napkins, plates, and utensils I could find. Getting this set and printing out all the pieces I would need on card stock really helped pull everything together.

I tried to balance the light of Briar Rose and young Maleficent and the dark of Maleficent as she grew older within the party decorations by incorporating dark gloomy colors famously paired with Maleficent and Spring-like fairy colors. I did this by placing flowers and butterflies all over the room with the gloom of birch trees and ravens, and then making the cup covers, utensils, table cloths, paper straws, and napkins consistent with the crossover. 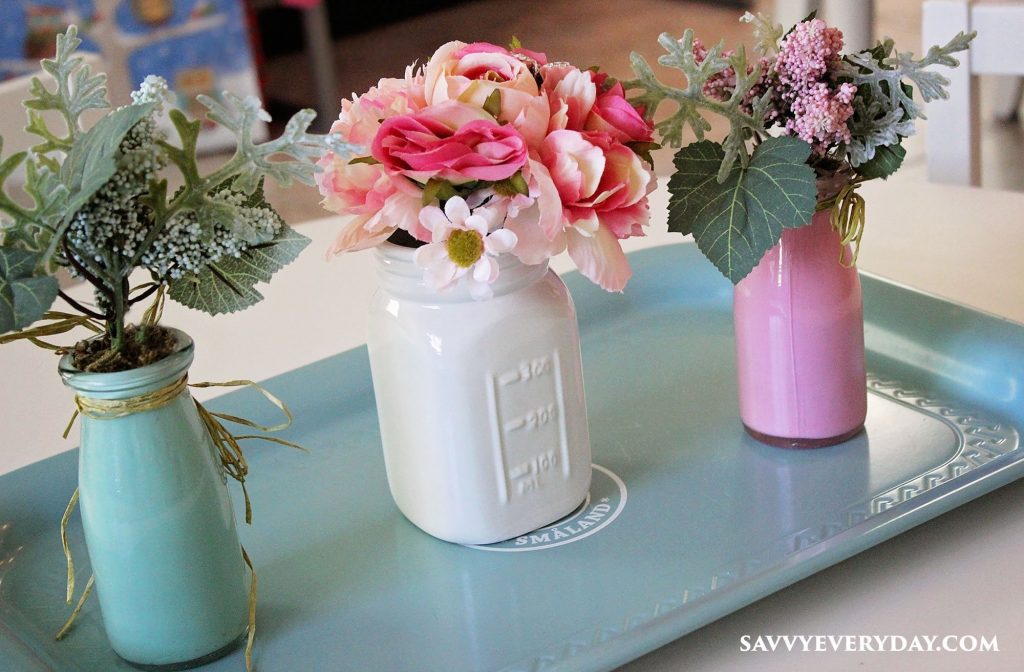 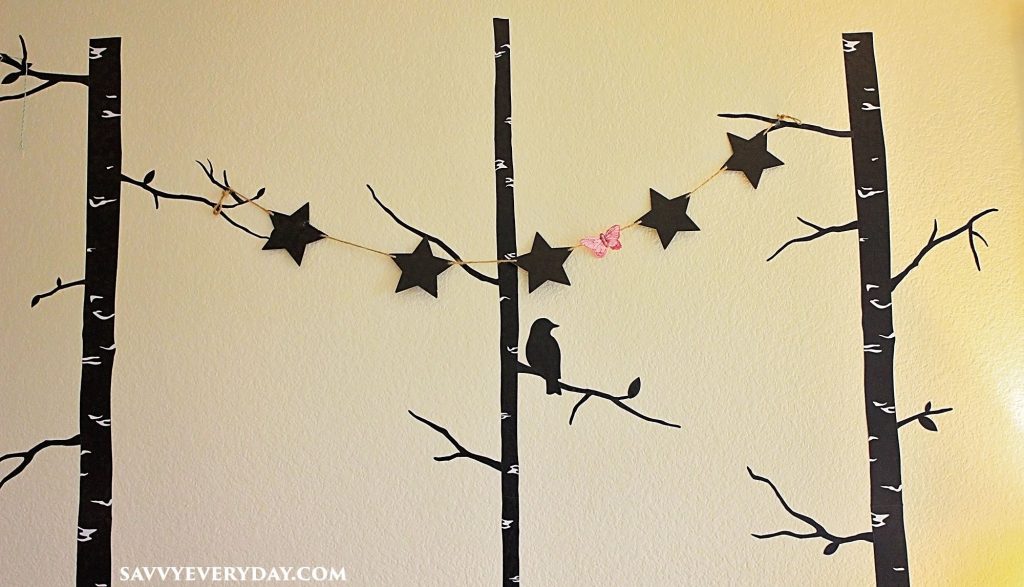 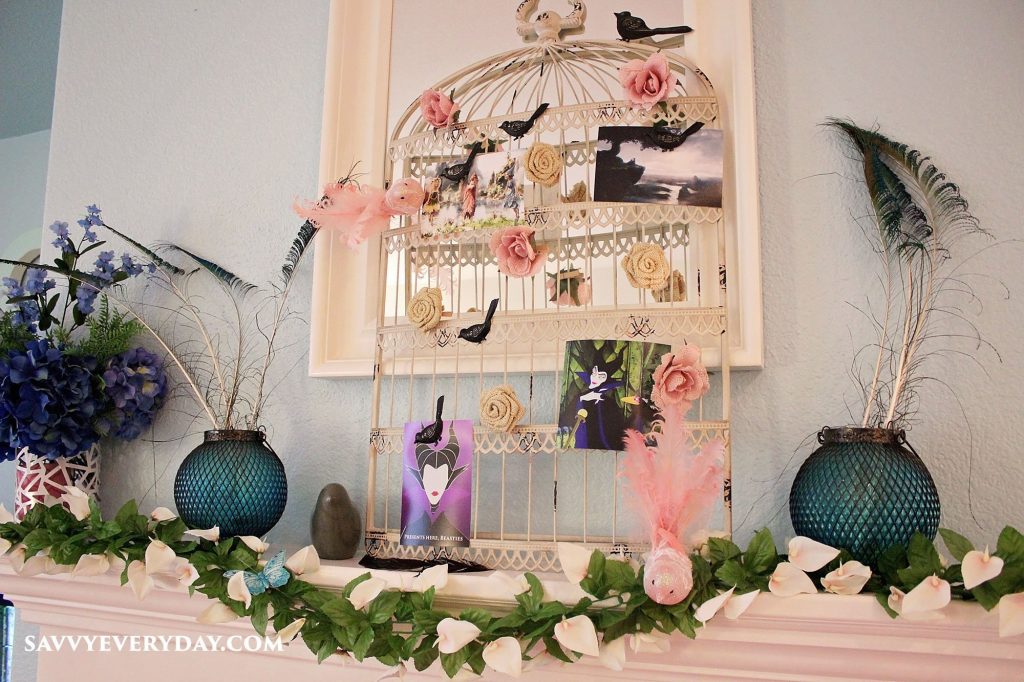 Since the party set I bought on Etsy uses roses in the design, I incorporated roses into my theme as well. I found some burlap rose clips for the bird cage, and beautiful napkins with the party colors at Target to go with my rose napkin holder from IKEA. (Tip: Try to incorporate items you already have into party decor. I’ve used the table lanterns from my Mucha themed wedding at all of Savannah’s birthday parties so far.) 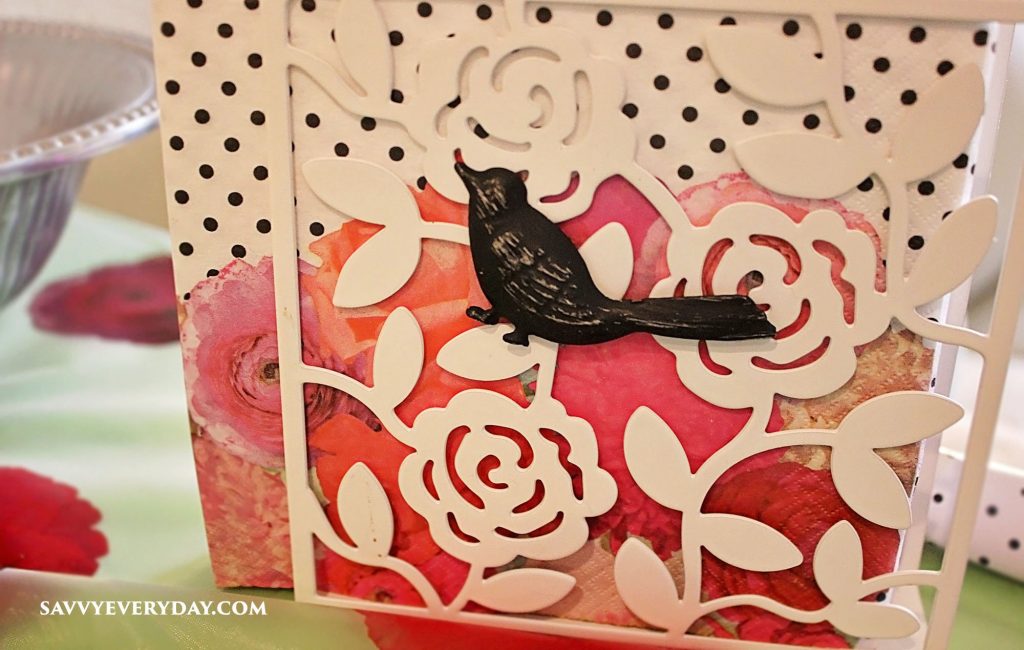 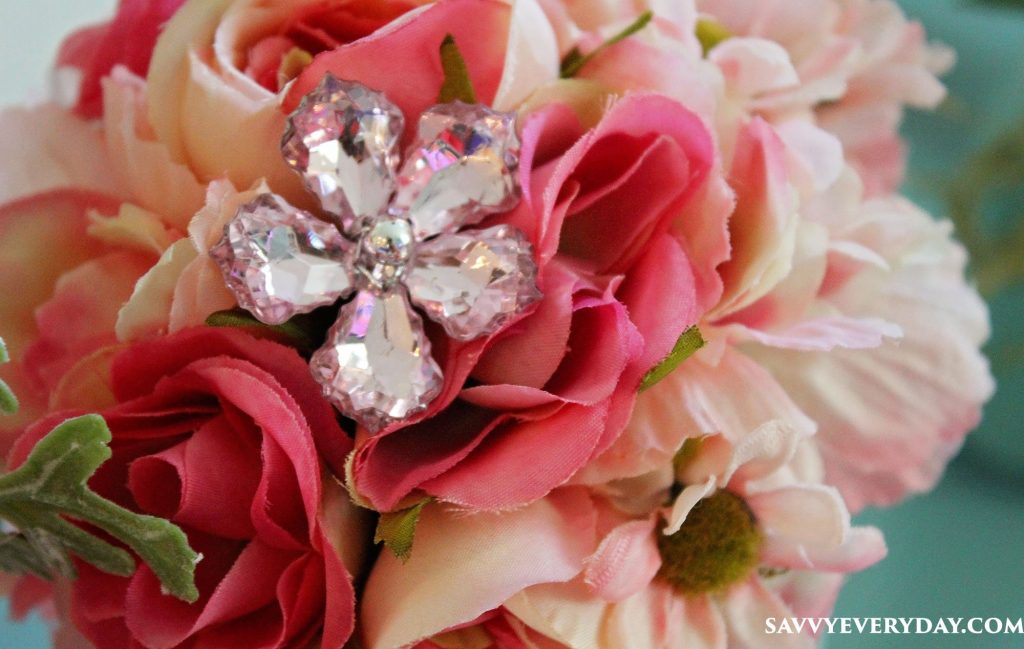 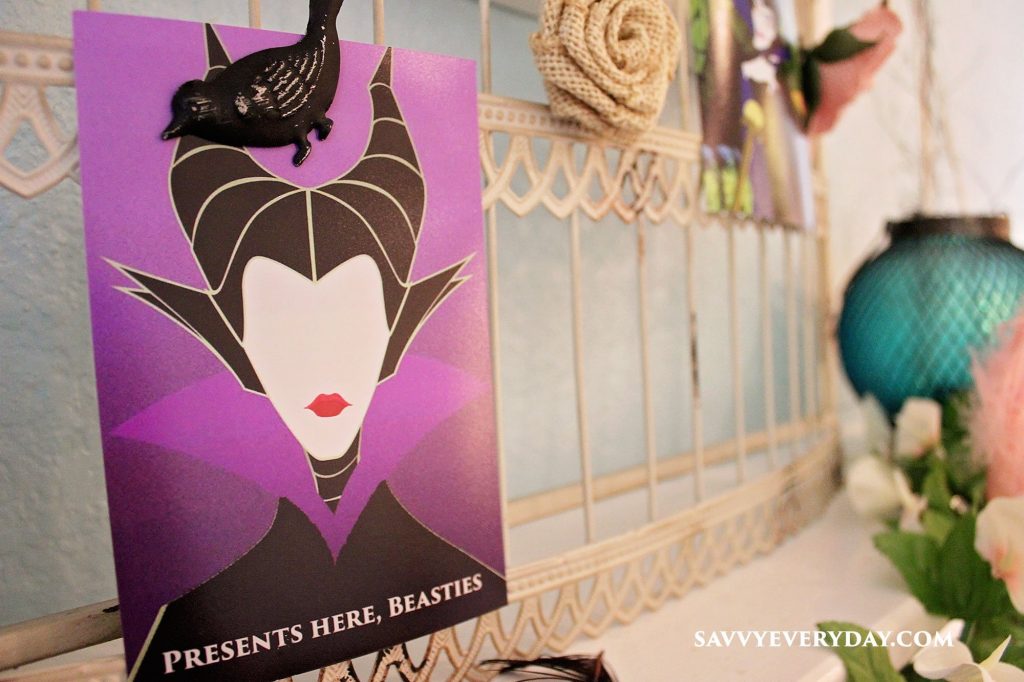 After an online search for anything Maleficent, I found that the official Disney site for the movie Maleficent has several printables and recipe ideas! I downloaded the pattern to make Maleficent photo props and cut out enough for everyone, then taped different color straws (within the theme) to each prop for guests to take home as a gift. This actually saved a bit of money since I already had the straws for guests to use with their cups and didn’t need to buy photo prop sticks. 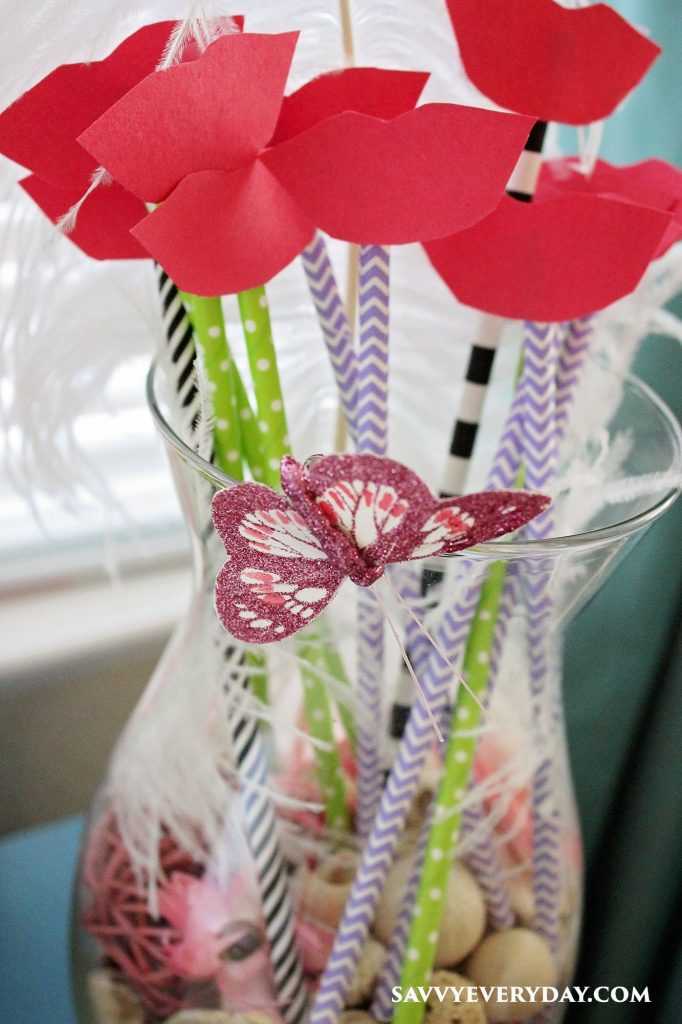 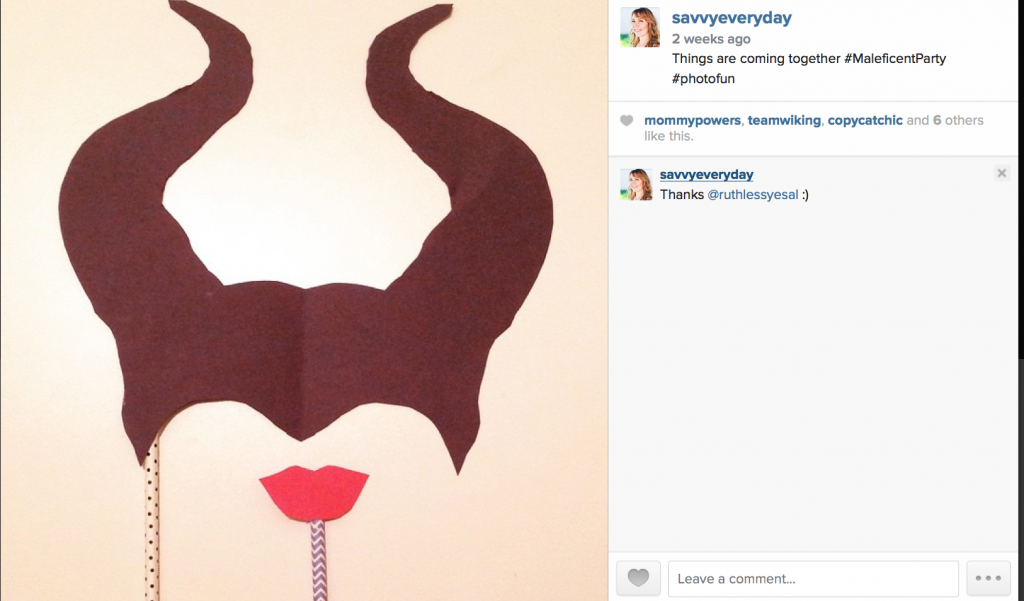 Since I tried to balance the light with the dark at the party, I also made little garland crowns for the kids and adults to use as photo props then take home if they wished. (Watch the Video tutorial, here). 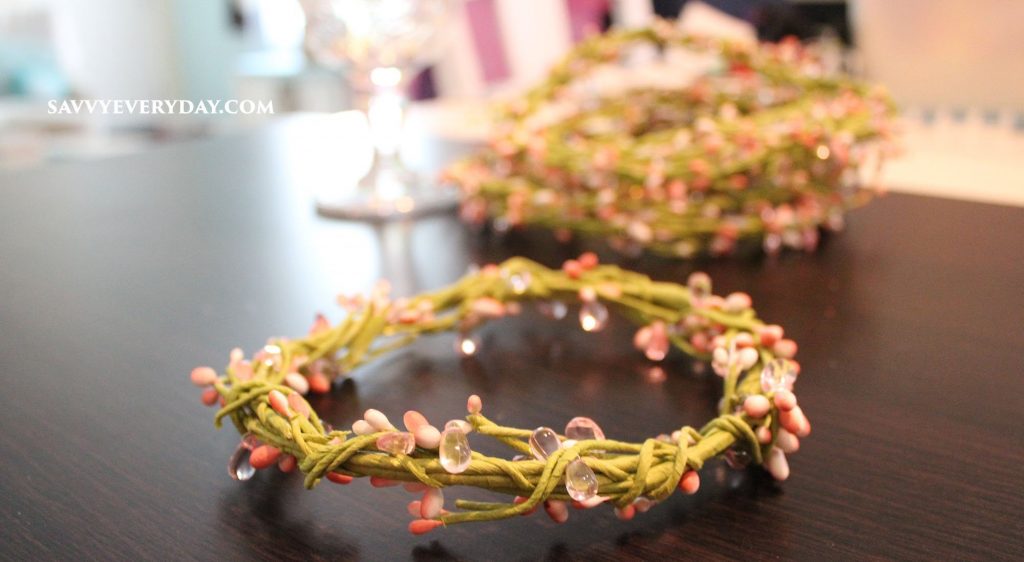 Though the table was already loaded with plenty of sweets, I found a 10-pack of Zebra Popcorn at Costco and thought they would be great Thank You gifts for families who attended the party. Using the leftover feathers from the raven photo clip I made (scroll below to see it) and some paper roses (about $1.50 for a sheet from the Michaels under $5 section), I put together barrettes to clip on the popcorn packs so they would fit the theme a bit better (and come with a little added gift). 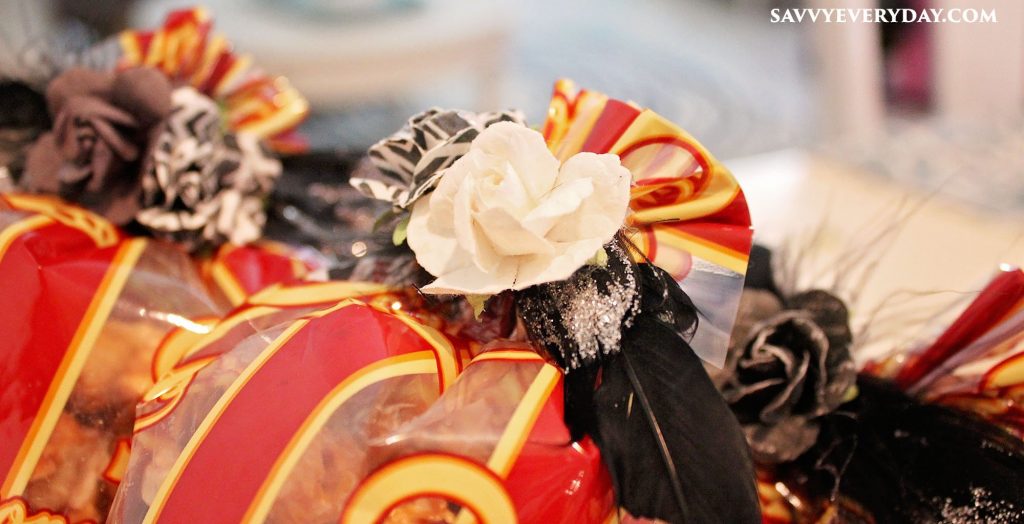 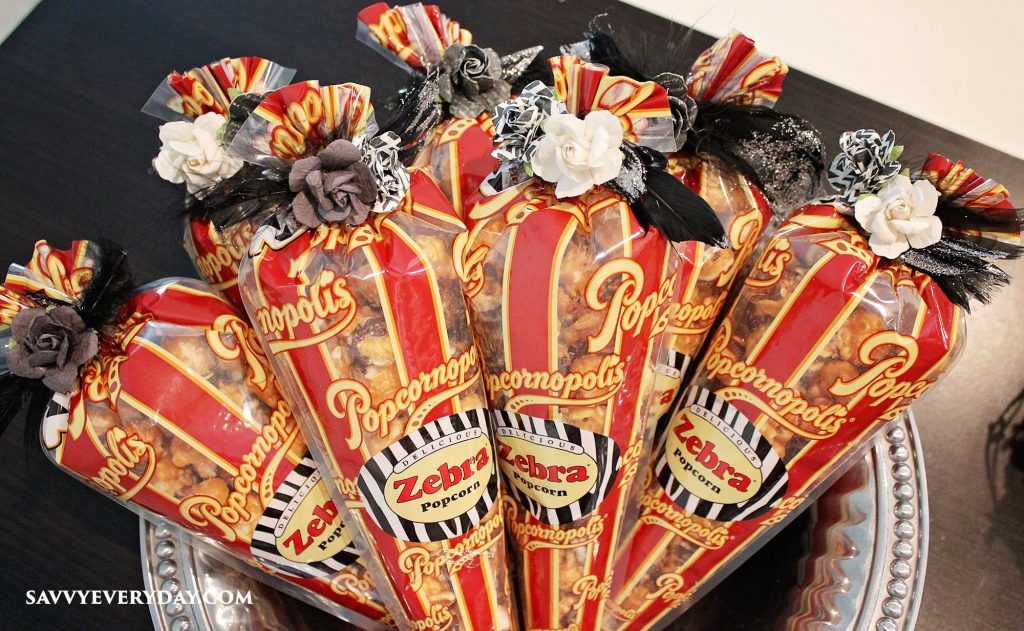 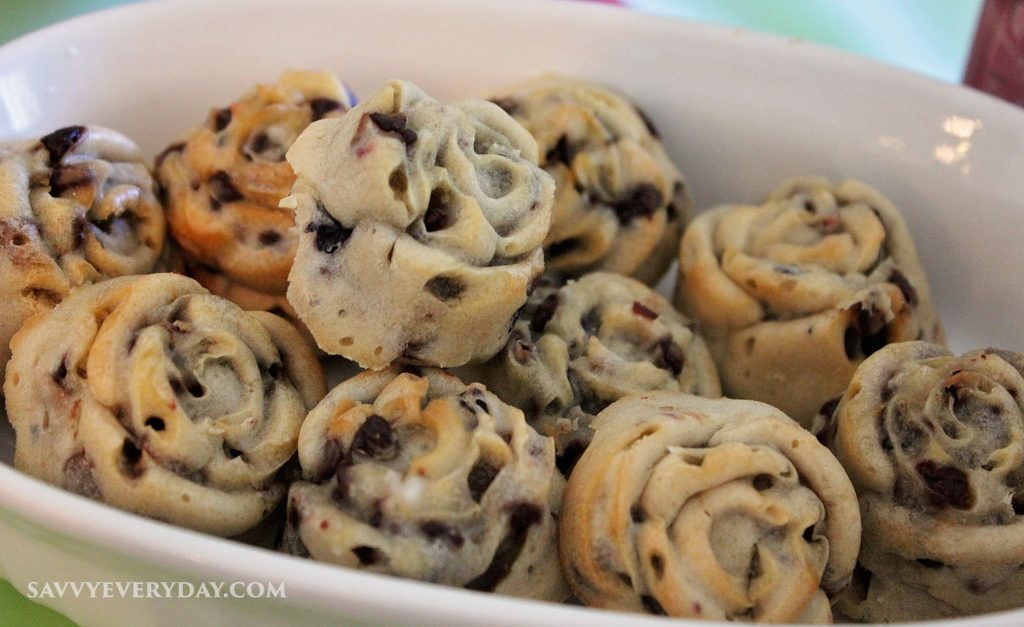 Another fantastic idea from this Disney site are these Scepter Snacks (I was going to try the Beet Crisps one too but had no time). I switched out the olives in the scepter recipe for green grapes since grapes are a bit more acceptable at a kids party. Cheese and pretzels are just so tasty, and the grape adds a refreshing burst to this combo. Just be sure to make these either the night before or the day of the event (any earlier and they’ll end up soggy). I also found a silicon mold to make little chocolate chip rose cakes. 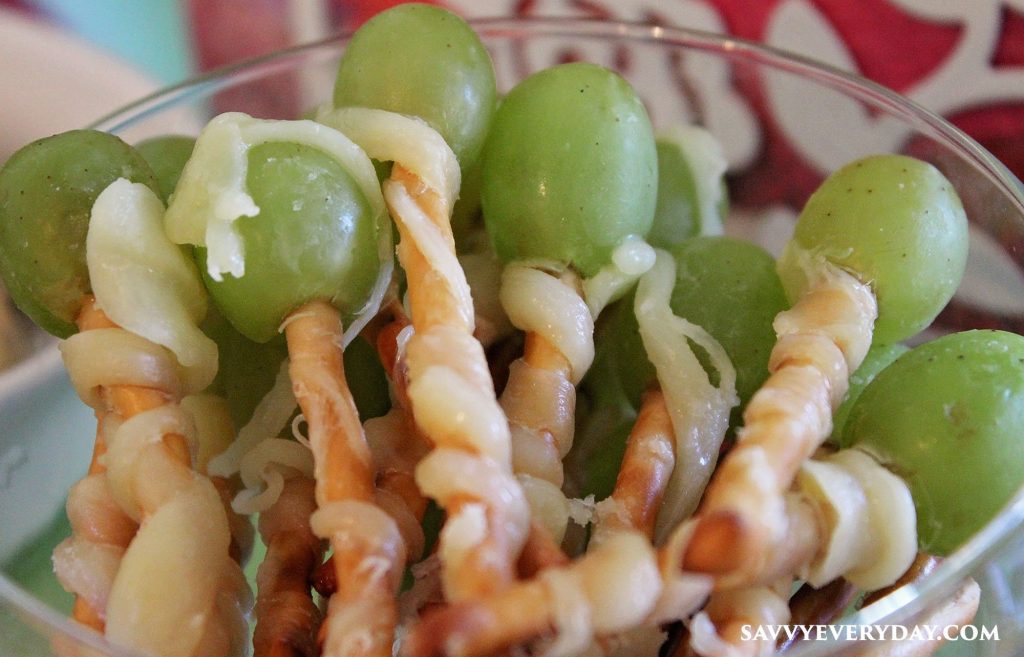 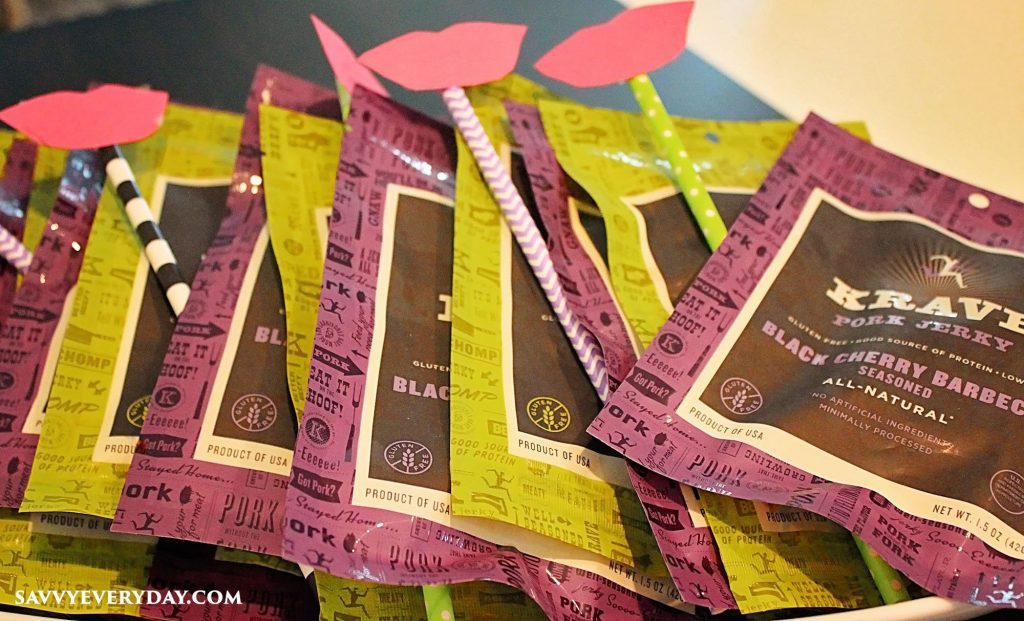 Since there wasn’t enough time for custom cookies (and I didn’t want to pay $30 for 12 of them), I decided to buy 3 boxes of Cocola macarons from Costco and attempt to create a pearl dusted raven on each macaron using a makeshift stencil I created. Did it work? No. So I tried drawing on them with sparkly icing, which was a bit better, but still not quite as awesome as I imagined so I only did a few. 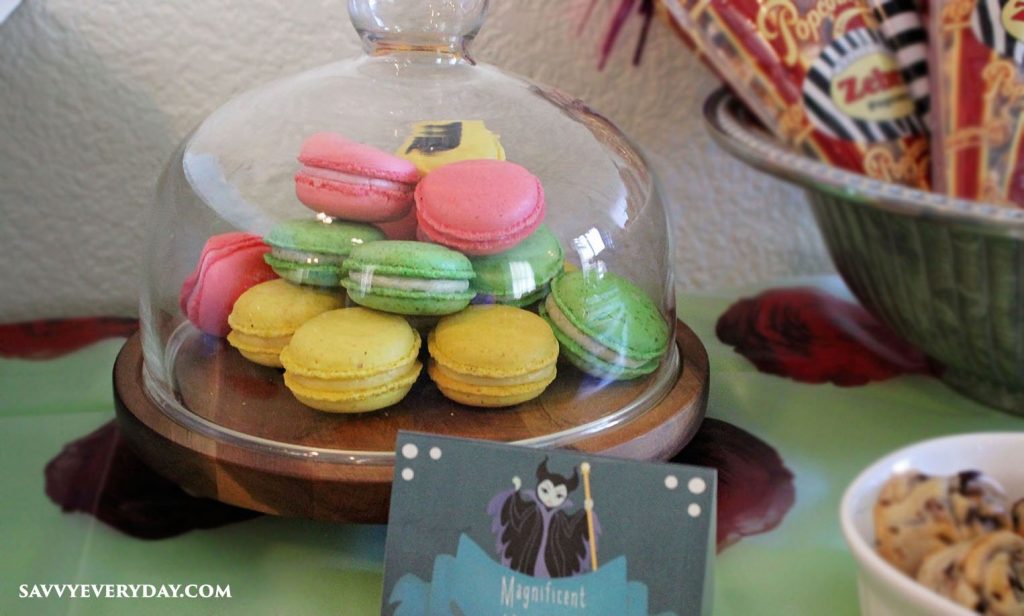 After figuring out the macaron situation I picked out all of the green, purple and dark blue Jelly Belly beans from a Costco size Jelly Belly jar and layered them with some red ones in the center for rose. The kids loved these! Feeling a bit like my table was all sweets, I also added a sandwich bar with several kinds of cheeses (Asiago, Dubliner, Colby-Jack, Swiss, and Cheddar), nitrate-free turkey, seeded wheat bread, Just Mayo, peanut butter, and strawberry jam. There were also some Luke’s Crackers out for the kids to snack on with the cheeses (another hit). 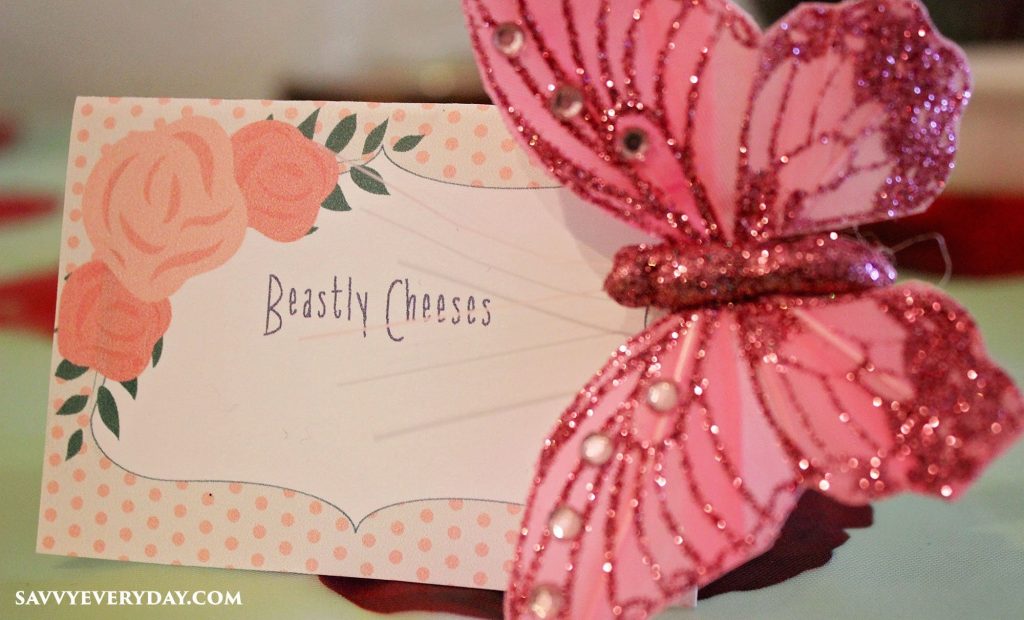 The beverage of the day was fruit-infused water (with a wee bit of sugar). I washed and added sliced lemon, raspberries and blueberries, then stirred it all up. I had some organic Veri Soda for the adults to try as well. I printed out some different Maleficent pictures and sayings I found, and bought a $1.50 photo clip canvas bird at Michaels then covered it in black feathers to make it look like a raven. Michaels also had a sheet of pearl accents in their under $5 section, which I used for the raven’s eye and to make my Thank You cards pop. 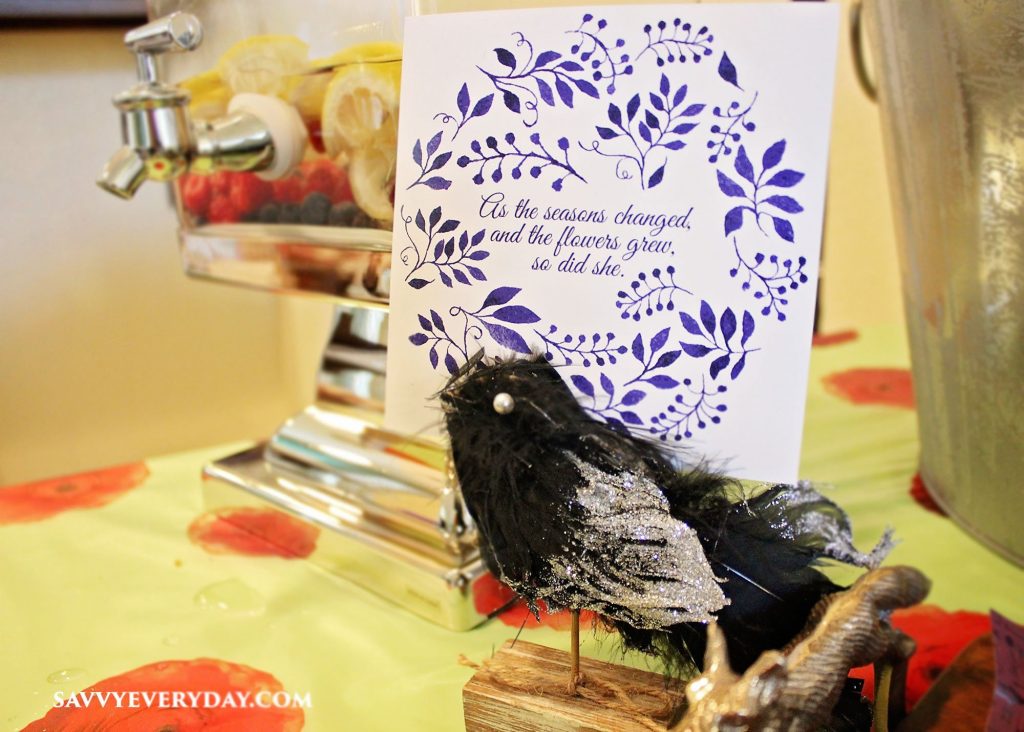 From party decorations to her outfit, my daughter wanted a true Maleficent party. Though she was expecting it to be more evil queen and I made it more of a young Maleficent theme, she was just as excited about it once her outfit started to come together. I downloaded the tutorial to make Maleficent wings from the Disney site then ended up winging it (I crack myself up) and just gluing foam to some cheap $1 section Target wings S had then covering them in about a yard of feather fabric from Jo-Ann Fabric. 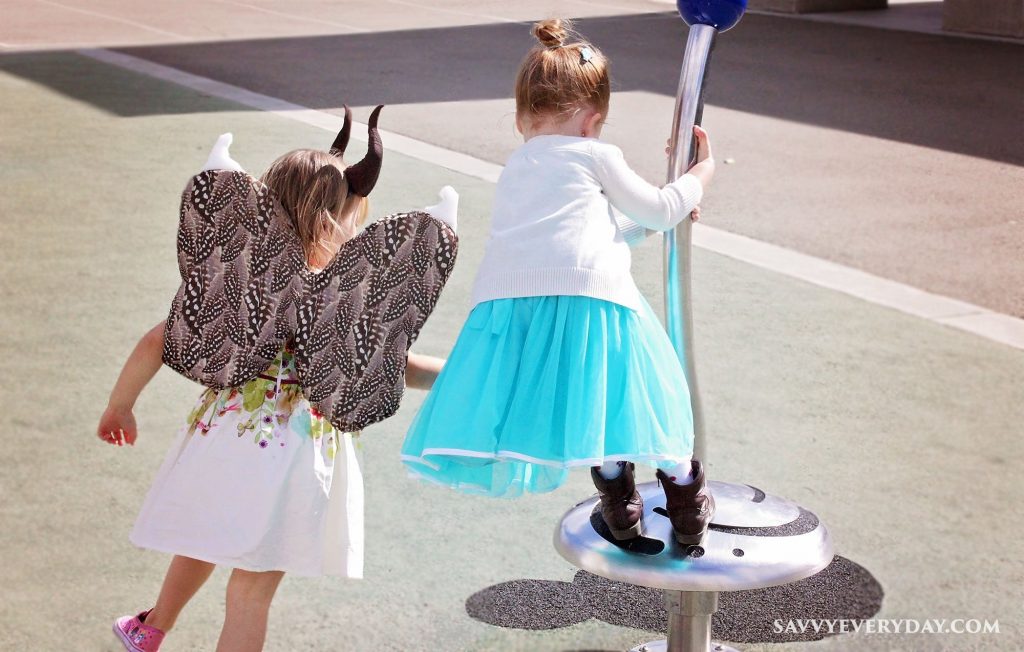 At first, I attempted to make my own horns, but since I really wanted them to look real I ordered a pair of ultralight dark brown 3D printed horns from a Mudpies and Majesty on Etsy for $25. I also planned on making a dress that looks a bit more like young Maleficent but decided to change it up a bit and got a dress from Target ($20) that looks across between fairy and Mother Nature to still sort of fit the character (and so we can use it as an Easter dress) then topped it with a Sunflower necklace ($5). 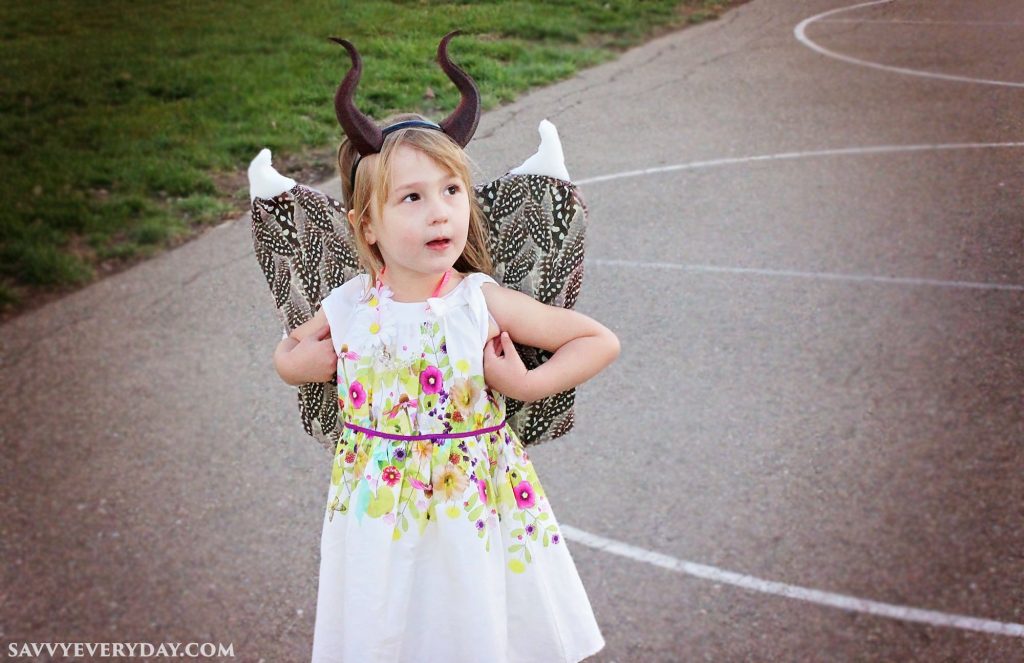 Have a unique or fun kids party to share? Send it to [email protected] and your party could be featured! 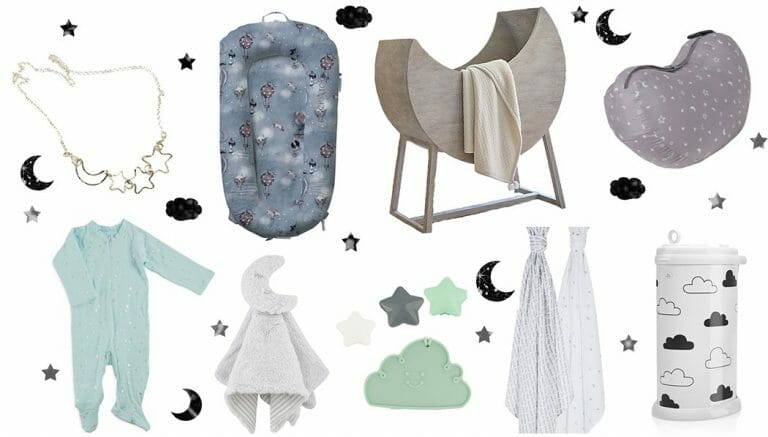 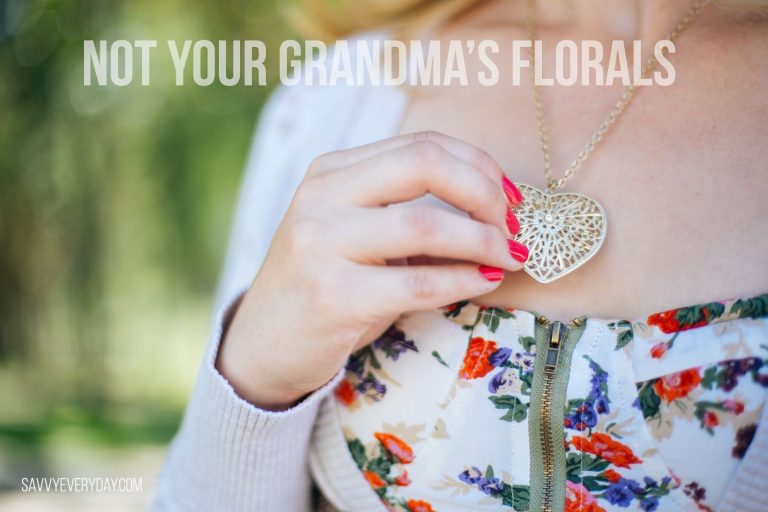 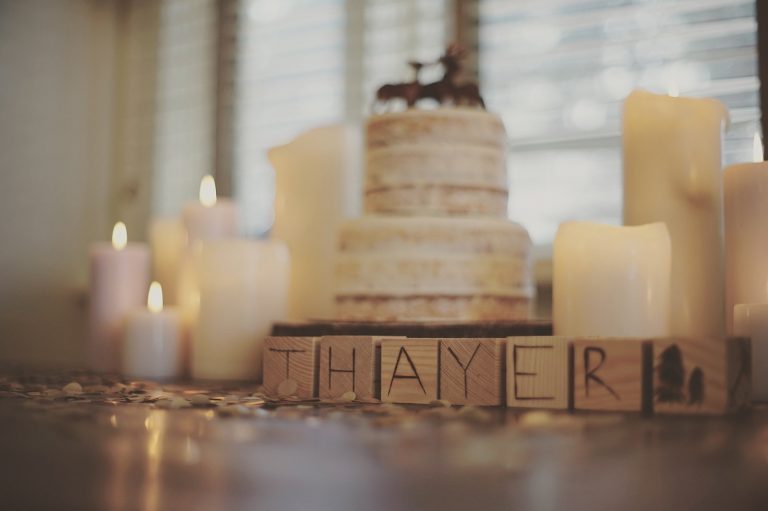