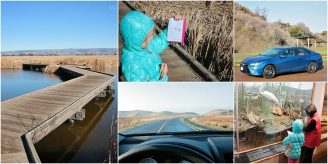 School breaks are fun for the kids, but often leave parents wondering how to entertain the kids and still get some work done. Since my sitting at the computer searching for a logo update was making the kiddo a bit antsy, I decided to take the 2016 Camry SE (Starting at $23,840) I was reviewing during Christmas out for a little adventure to Coyote Hills Regional Park with my sister to keep our kiddos entertained.Keep reading for a recap of our day and my take on Camry’s safe family “sport” car. 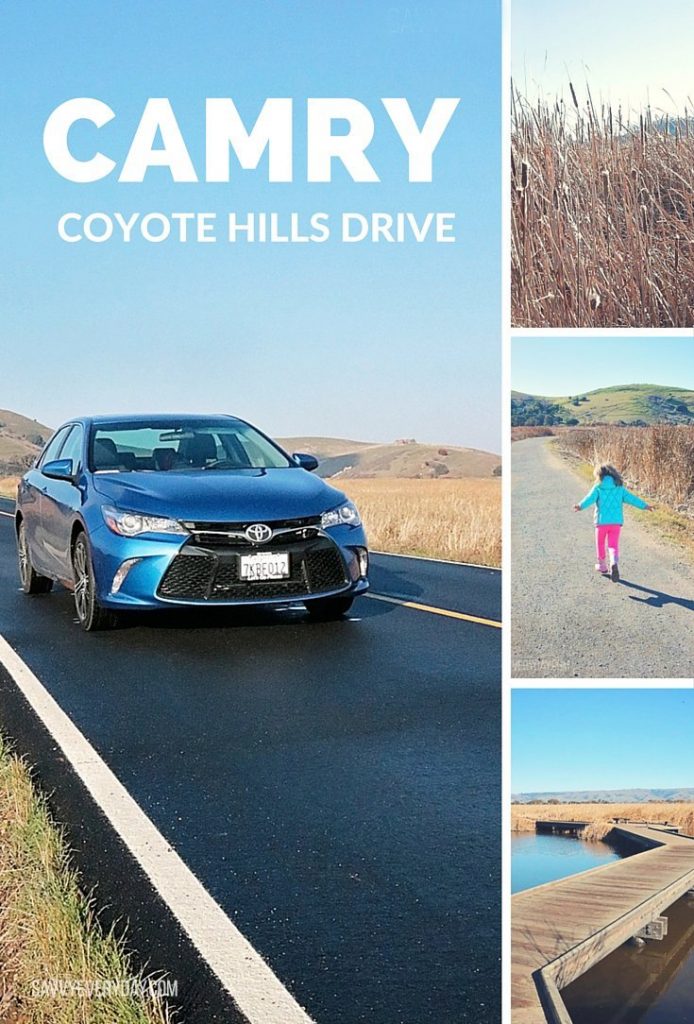 Coyote Hills Regional Park is a part of East Bay Parks in California and offers hiking, biking, naturalist programs, butterfly garden, wildlife refuge, and picnic fun. According to their site, there’s about 979 acres of marshland and rolling grasslands, so we thought this would be a great sort of nature learning experience for the kids, too. When I was a kid I went to Coyote Hills and Don Edwards Bridge for field trips where we would dissect owl pellets. As I got older it was just a pretty place to walk and use as a backdrop for photos I took of families. I forgot about it for a bit and never took S here . . until now. Neither kiddo had ever heard of a marsh before, so they learned something when we went! 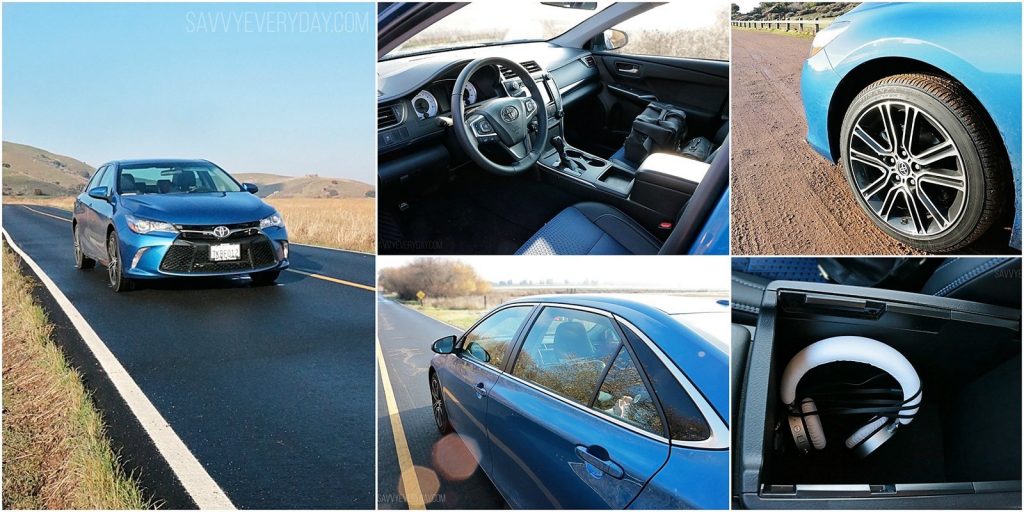 Though it would take me about an hour to get there, Coyote Hills is just 20 minutes from my mom’s house so I met my sister there so we could all go in one car and she could check out the Camry SE, too. I’ll be honest . . . I’ve said in the past that I’m not a fan of the Toyota Camry, which is exactly why I’m glad I reviewed the 2016 Camry SE to change my opinion. Not only does this car look sporty, but the interior is a pretty blue and black to match the car’s exterior Blue Streak Metallic color. It’s fresh, comfortable, has great storage (did I mention I had this during Christmas and it carried my entire haul? The trunk is massive. I’m so impressed). 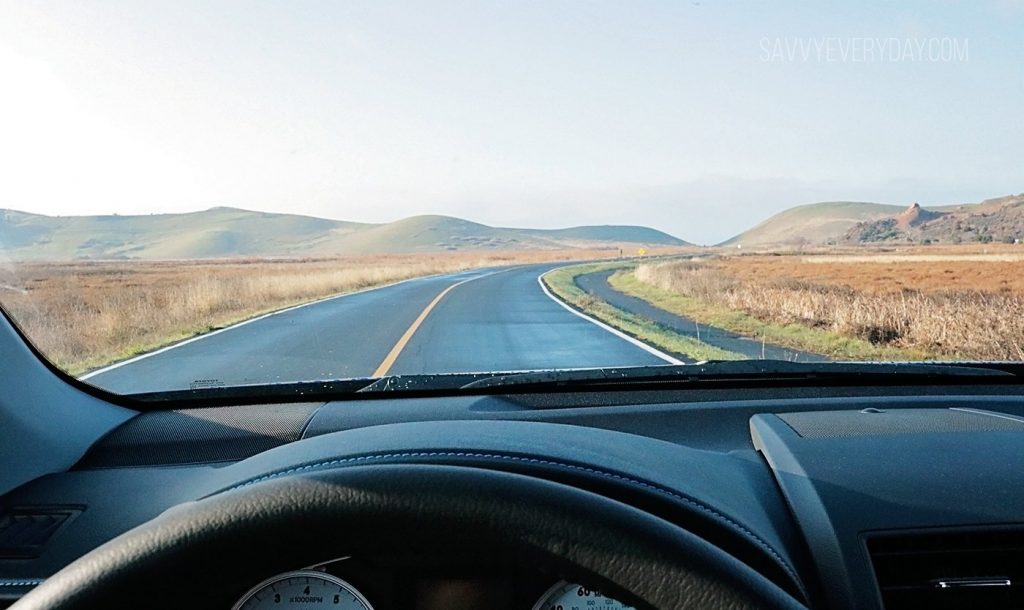 My favorite things about the car are the 25/35 mpg (it only cost me $30 to fill the tank!), the backup camera and the sporty feel. This is a super safe car, but it went in the mud, over hills, on long distance freeway drives (I live far from A LOT) with a little zip and smooth driving. Needless to say, getting to Coyote Hills wasn’t an issue for this car, and the area made for a lovely backdrop in my car photos. 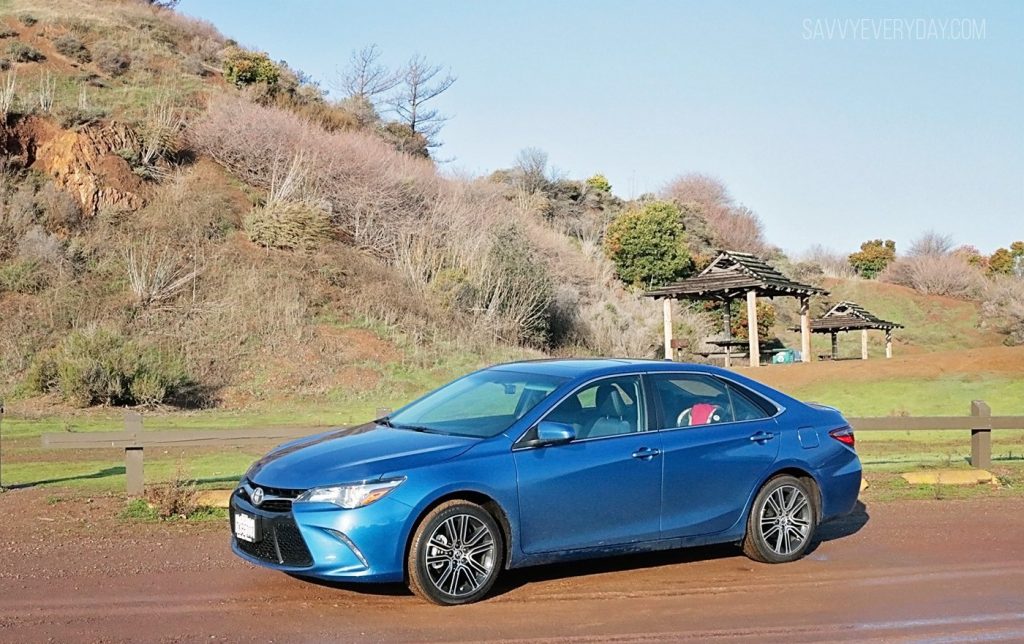 The Coyote Hills visitor center hosts a great photographic series highlighting the different indigenous tribes local to Ohlone with quotes about their ancestry. I’d love to get in touch with these tribes for a family series on Savvy Every Day, so I took some not-so-great pics of the series for my own contact reference later. The kids really enjoyed looking at the marshland inhabitants exhibit. 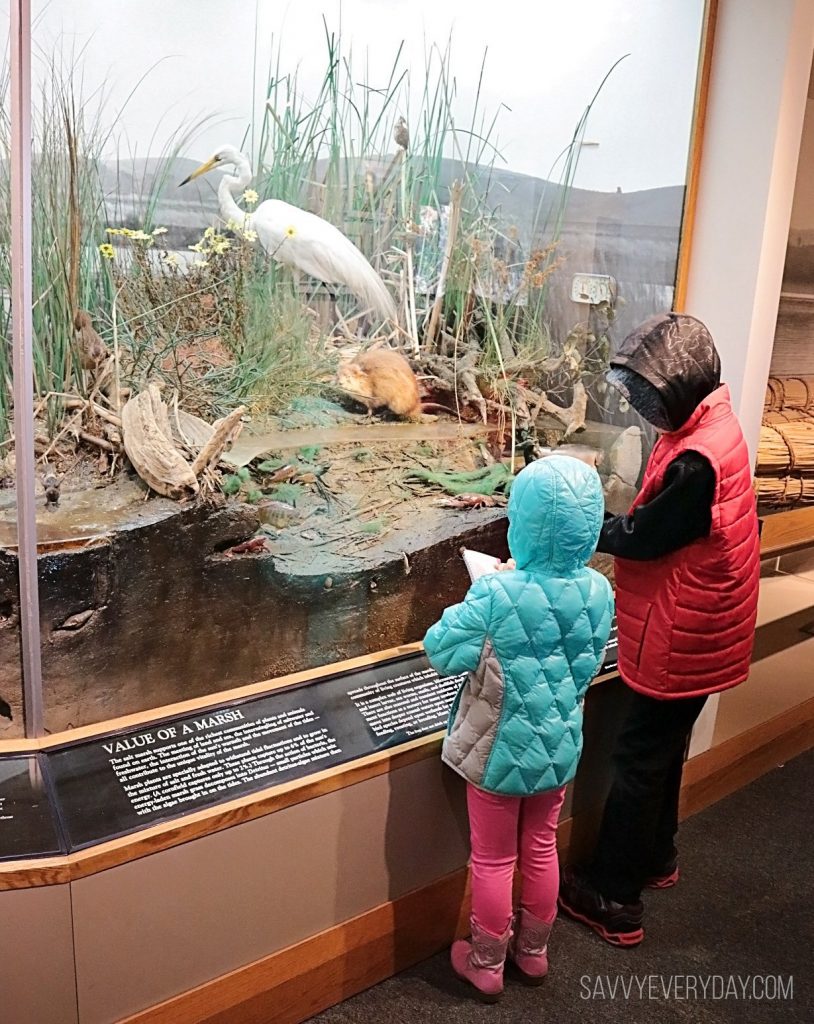 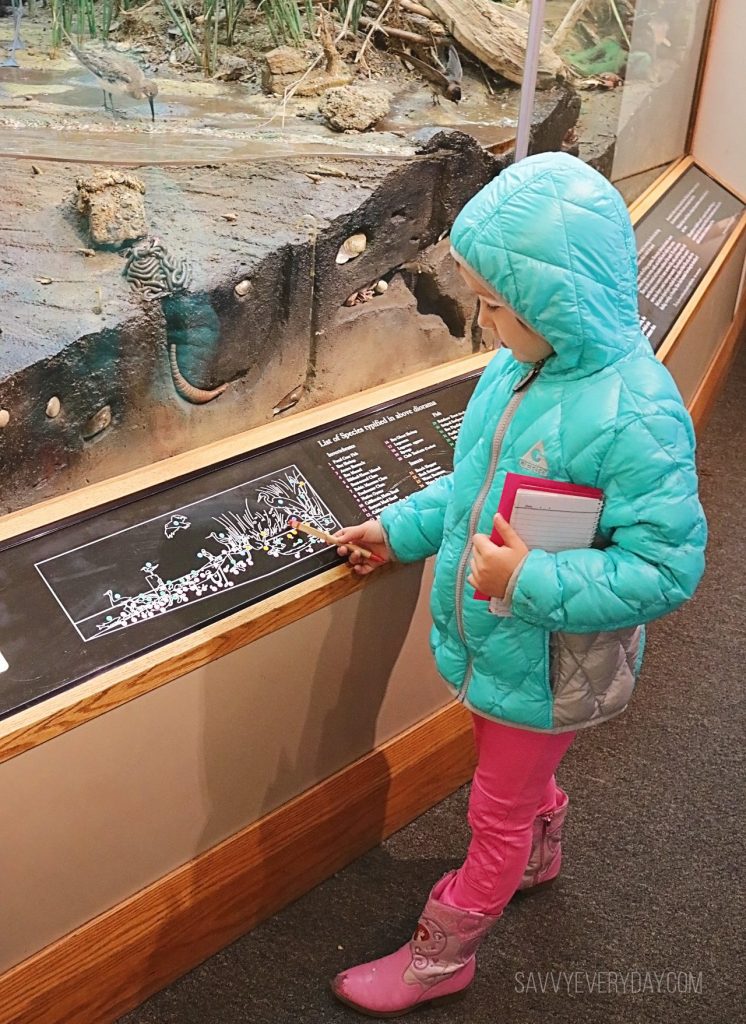 When S asked me what the rodent in the exhibit is called I was stumped for a good while since it looks a bit like the Rodents of Unusual Size from Princess Bride and a bit like a gopher. Fortunately my sister knew that it’s a muskrat, and the exhibit’s infographic verified this. My nephew was amazed by all the creatures that live in the marsh and S took her own version of notes in her little adventurers notebook (adorable!).

After the visitor center, we ventured toward the marshland to show the kids what it’s like up close. There’s a lovely bridge walkway through the marsh that I remember walking as a kid and wanted S to see how cool it is. It’s so different now, though, super dry. S had fun charting out route in her notebook and leading the way with a map she had devised. Naturally, this later led to a temper tantrum when her cousin walked ahead of her instead of following her as she led the way with her map, so we needed to cool down for a bit a few times before we eventually had to walk back for potty breaks. 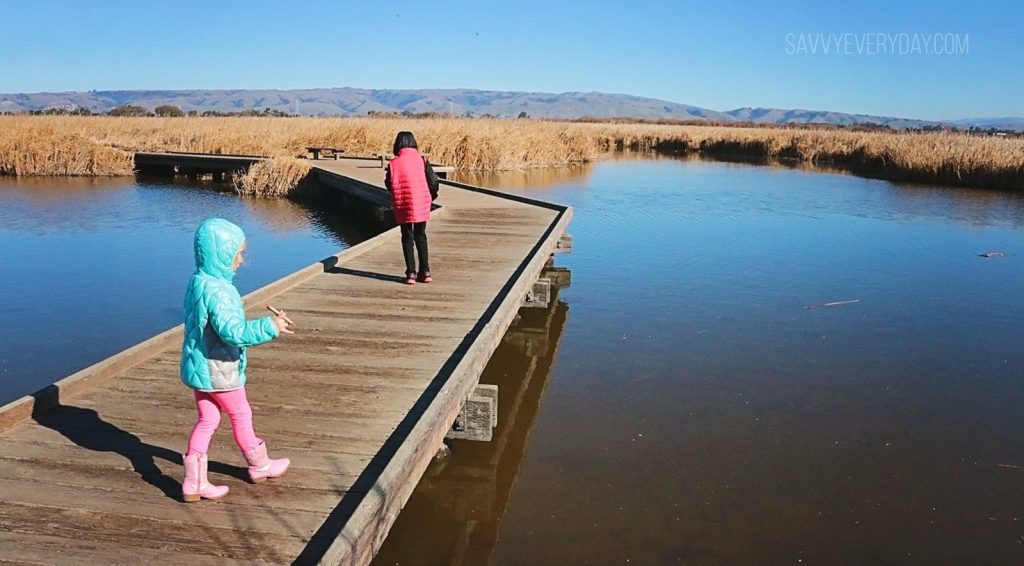 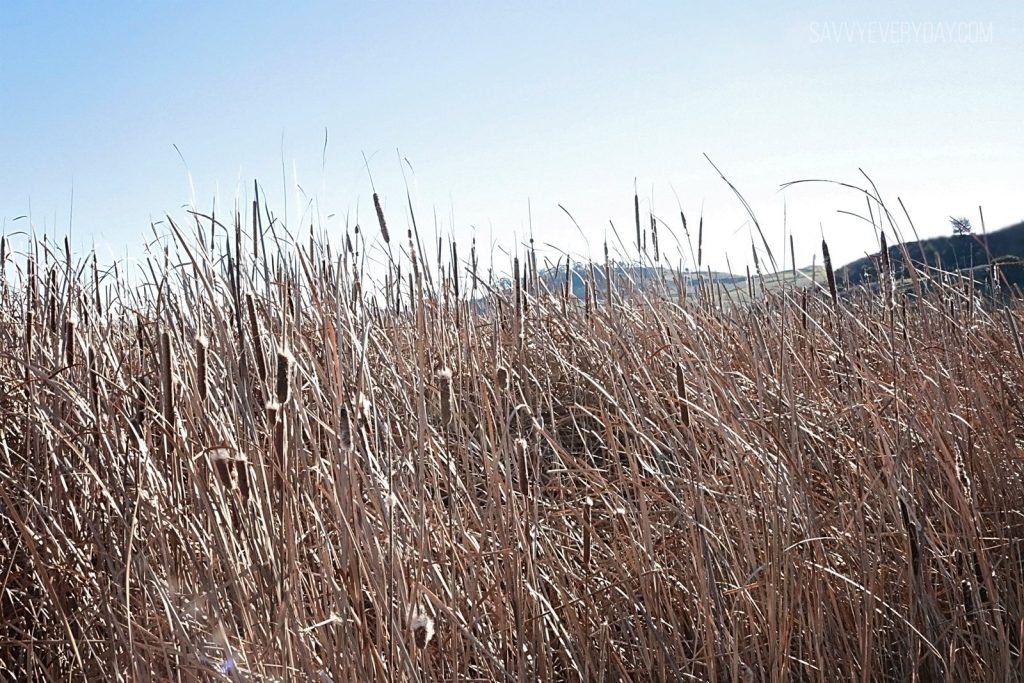 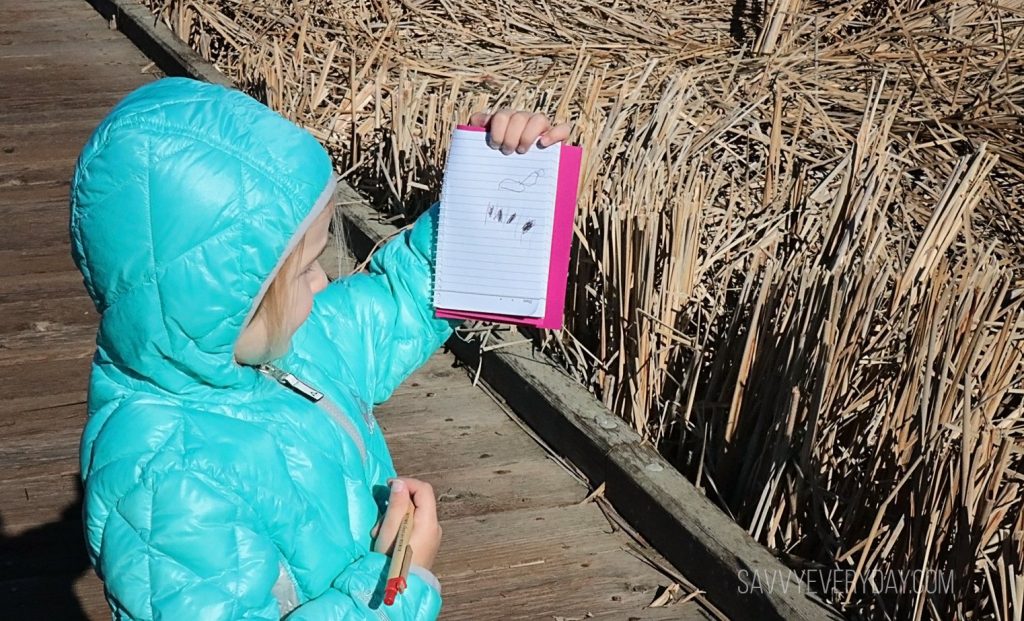 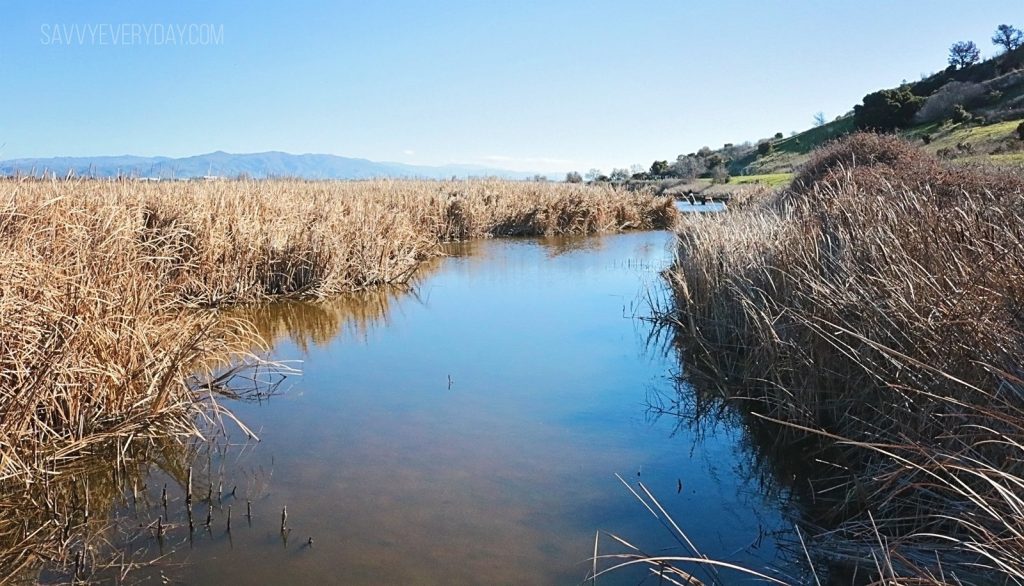 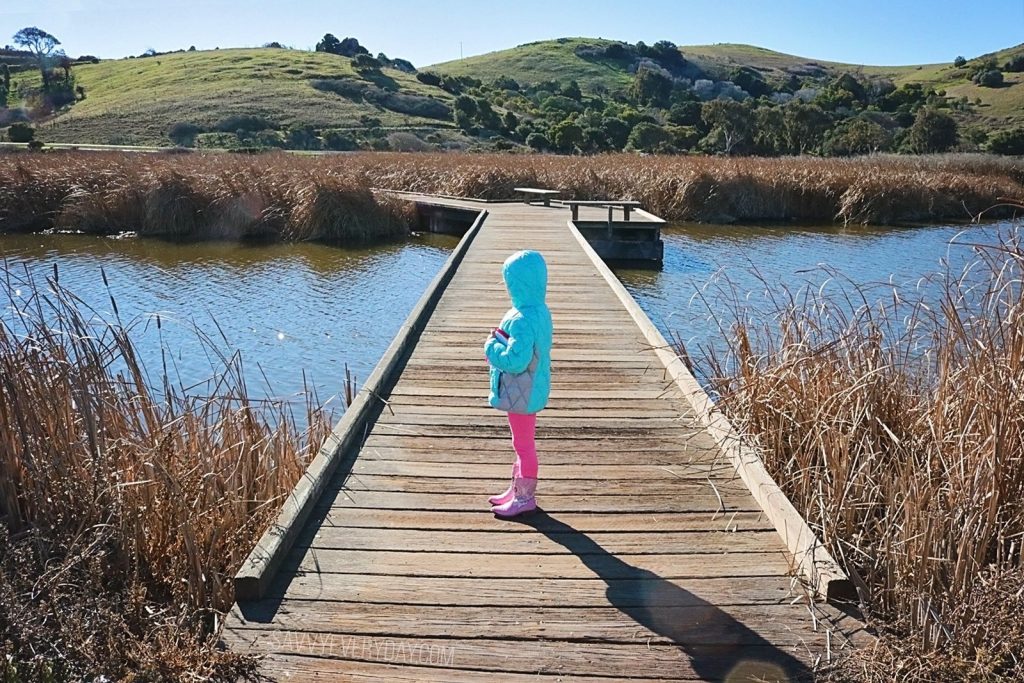 After my sister and nephew ran ahead to the restrooms S started to “fly” while she ran, which was just so awesome. I was so excited to see her enjoying the outdoors, enjoying the seemingly little but really big moments of childhood out in nature. She pointed at everything she saw and I did a Periscope (@savvyeveryday) on our walk back to the car that you can check out below for a better look at Coyote Hills in motion too (literally since I’m walking around holding my phone for the video). She got a little tired in the middle of my Periscope so I ended it for us to take a break on a bench and look out at the ducks in the water. It was a super fun and peaceful day — Just what we both needed. 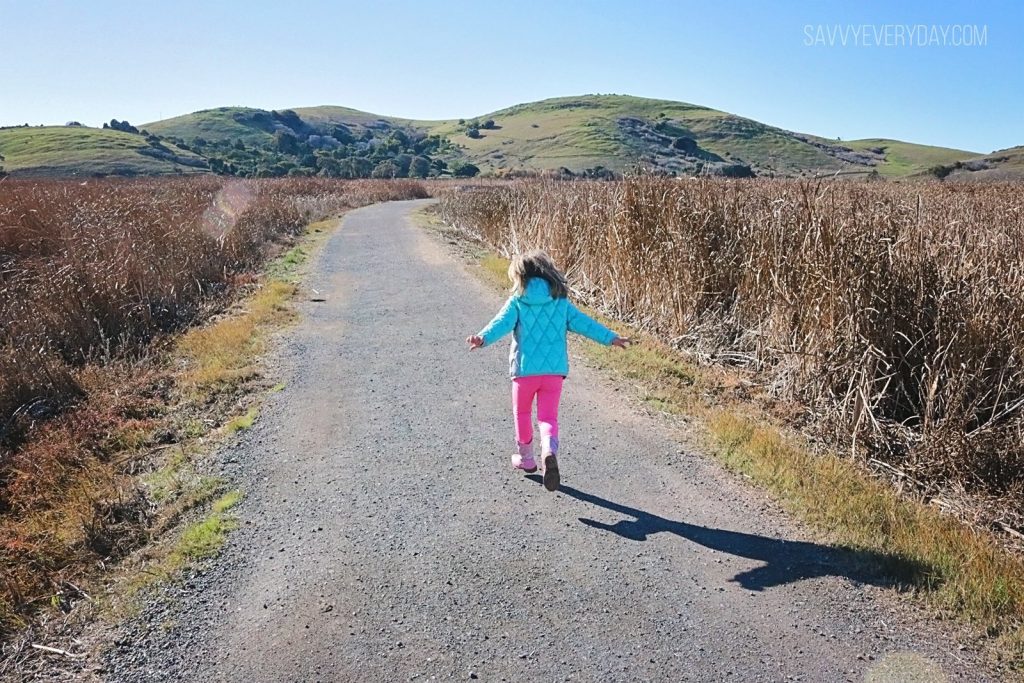 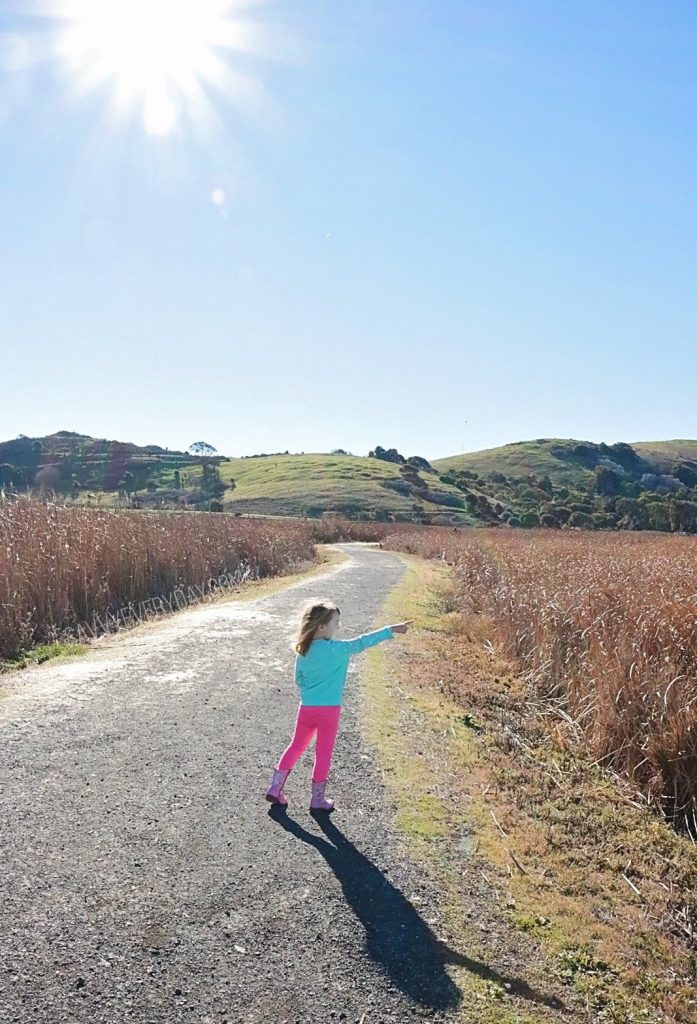 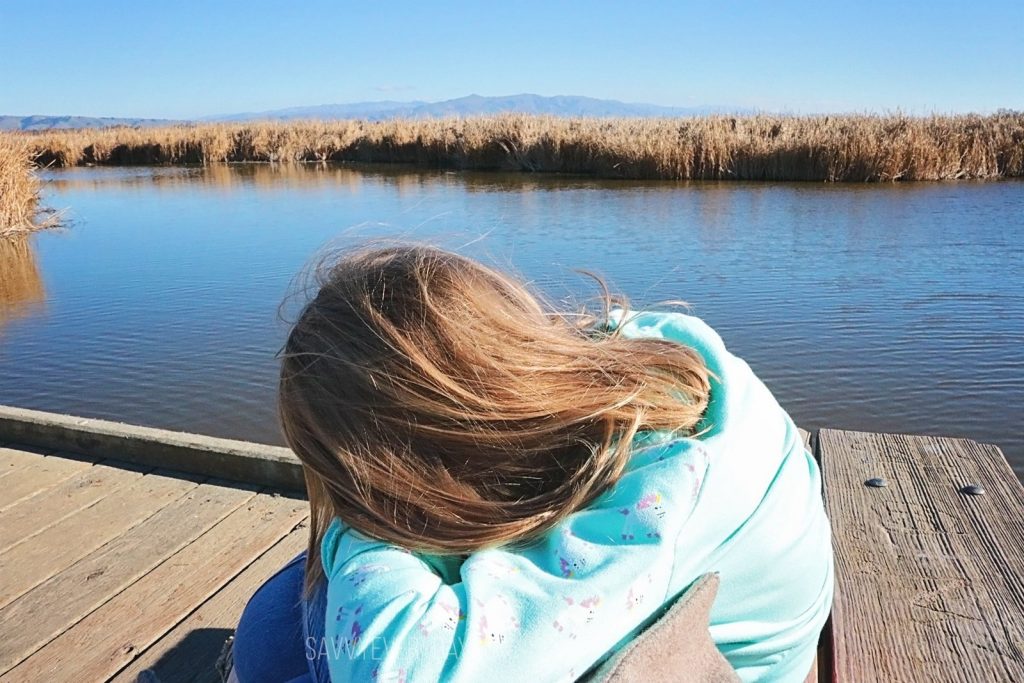 Where did you spend the holiday break? Are there marshlands near you?
I was allowed to drive a 2016 Camry SE for a week to conduct this review. All opinions are my own. 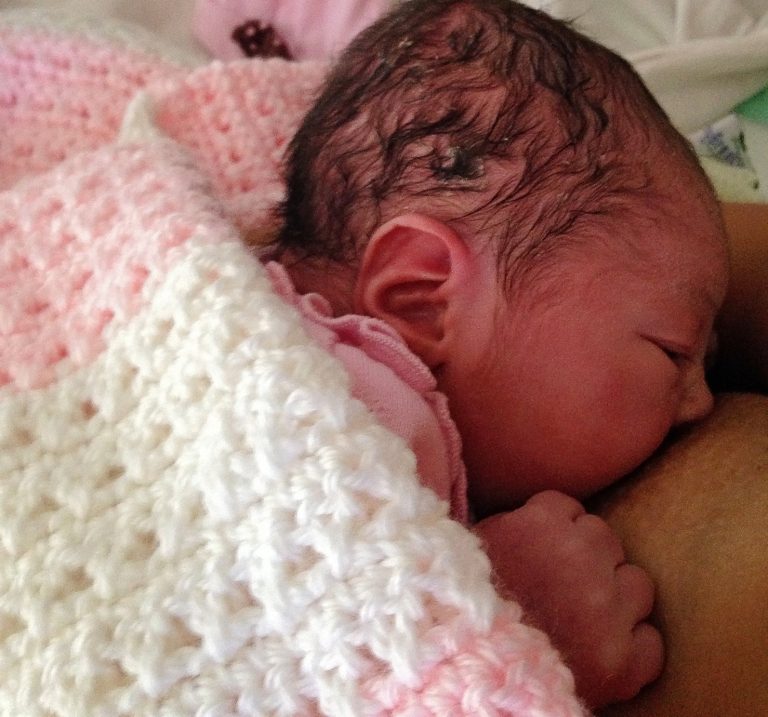 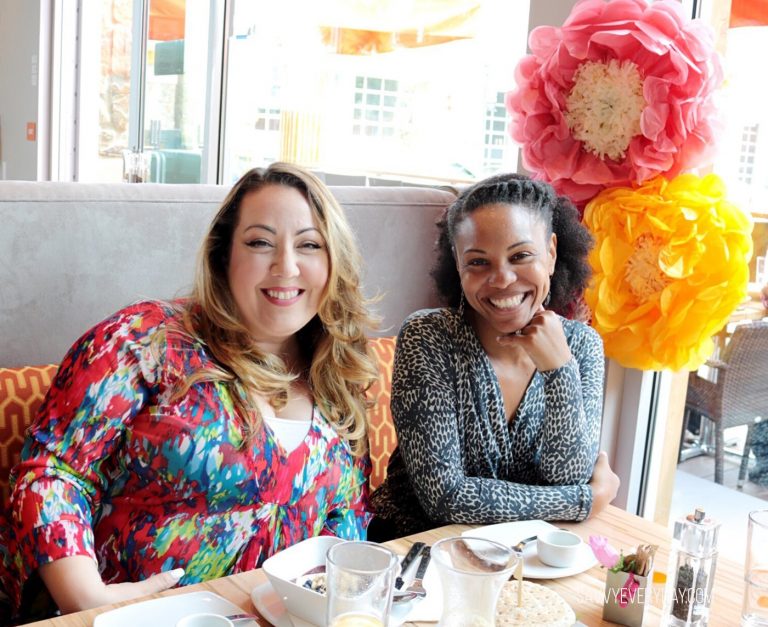 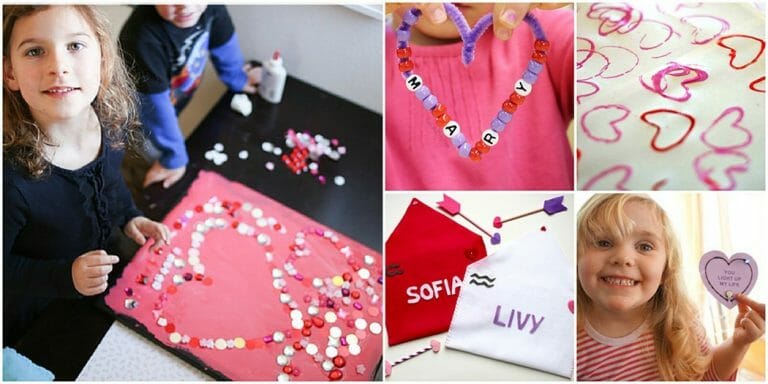 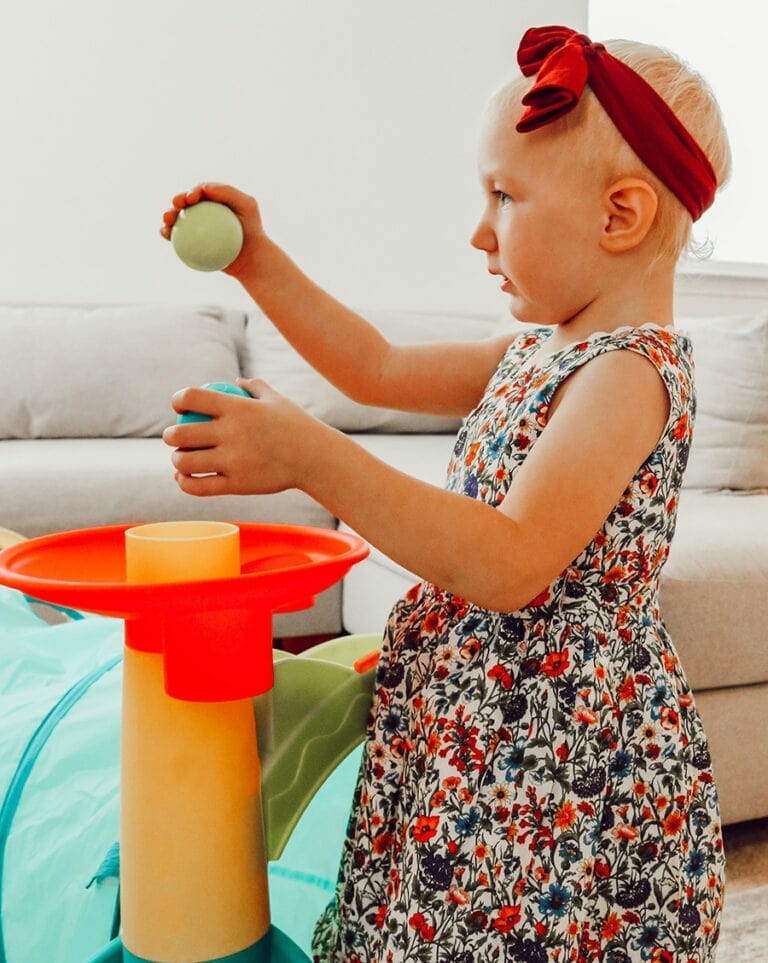